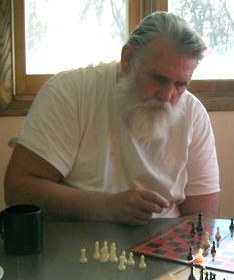 In a barn outside of Fairbanks, I left five Underwood 5 manual typewriters that I used until I acquired a used 286 computer in 1990—I was slow to embrace technology. I have been slow to embrace small-screen technology. For years I ate meals while holding a telephone to my ear, twisting it upwards to chew, then down to speak. So when I sold my business in 1979, bought a small boat and began to fish commercially out of first Kodiak, then Dutch Harbor, I freed myself from being tethered by a telephone. I have avoided that tether ever since. Today, I do not have a cell phone nor do I speak often on telephones. Nevertheless, I live in an age that is “connected,” one person to another by cell towers, tablets, and the Internet, which permits me to write a message and deliver it around the world the same day.

In January 2002, I was called to reread prophecy, with me not being a person I would have selected for this task. To reread what has been read before suggests a differing set of linguistic signifieds are to be assigned to familiar signifiers, that biblical prophecies were sealed and kept secret through the signifieds [linguistic objects] assigned to the words of these recorded prophecies. And assigning another set of meanings to familiar words has produced a text-based ministry of mostly self-aware texts as humanity slouches toward the generic time of the end.

I wasn’t called to make disciples for Christ; nor called to begin a mega-church or a worldwide religious revival. My calling came in the simple words, It’s time to reread prophecy, and the call came forty years to the day, hour, and minute after the 20th-Century’s most energetic ministry based on prophecy rejected additional revelation.

My calling didn’t include special revelations, nor visions, but only audible words that had a thinginess about them that caused them to remain fore-grounded in my mind for hours, even days afterwards. Evidently, it was assumed on high that I would figure out what I needed to say in rereading what has been read so many times before. And revelation by realization for the past fourteen plus years has been steady and on-going.

I didn’t set out to be religious: I started college as a 16-year-old math major on an honors scholarship. I had read the Bible when a high school freshman in an attempt to prove my newly acquired Seventh Day Adventist stepfather wrong about Sabbath observance. But in reading Scripture, what I found is that if a Christian is under the New Covenant, the Law [Torah] has been written on the Christian’s heart and placed in his or her mind so that murder (what the hand does) moves to anger (of the heart) and adultery (what the body does) becomes lust (of the mind). The movement of the Law is from hand to heart. Therefore, the Sabbath Commandment doesn’t move to the first day of the week but moves from regulating what hands and bodies do on the seventh day to regulating desires of the heart and thoughts of the mind on the seventh day.

This movement from physical to spiritual is seen in Hebraic thought-couplet verse where the first presentation of an idea or thing is of the natural world, of the flesh, of darkness, and the second presentation of the idea or thing is of the mind, of the heart, of light. This same movement is also seen in the Apostle Paul writing that the visible, physical things of this world reveal and precede the invisible, spiritual things of God (cf. Rom 1:20; 1 Cor 15:46). And this is the mythical key of David, the poet, that unlocks end-time prophecies that are not really about earthly nations but about mindsets, mental landscapes, and cosmic forces that cannot be seen by human eyes.

In high school and college and after being declared an emancipated minor while still 16, I wasn’t interested in being a Christian: I thought people who were religious were emotionally defective and intellectually challenged. But I was drafted into the Body of Christ in 1972, the story of which has been told before APA Vol 1. And thirty years later, I was truly called to reread prophecy, the proof of this calling is the work I have done since.

The links on this website will take a person to work that supports my claim to being the mirror image of a prophet, one who supplies spiritual meaning to words already inscribed in everyone’s Bible.